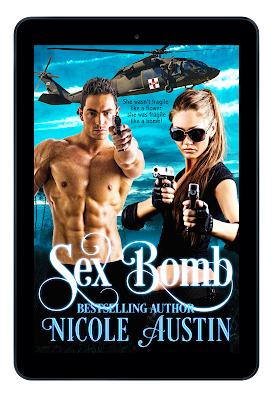 Sex Bomb
by Nicole Austin
Contemporary Military Romance / Action / Suspense
From first sight I knew Marine Lieutenant Harlie Savage wasn’t fragile like a flower—she was fragile like a bomb. Definitely not some princess who needed to be saved, either. She was a queen who only lacked a sword, and I vowed to be her weapon.

"So hot I blasted through reading it. I loved it! Need more like this one. 5 out of 5 stars!!!!" Robin R. Cripps - Amazon Reviews

Central American Jungle
HARLIE
Soaring across azure skies, riding the ebb and flow of thermals, skimming the tops of towering trees before dropping to skip over the shimmery surface of a lake, all with my favorite playlist blaring.
I love my job!
Every shade of green and brown imaginable blurred together as I zoomed past, rotors creating a wave of motion through the dense vegetation in my wake. The lush, diverse jungle formed an incredible backdrop that I took the time to appreciate on a daily basis. I considered myself blessed to have beheld such beauty.
For me, nothing else came close to the thrill of flying. When in my helo the constant noise in my head was silenced, all the tension and stress left my body and I found peace. Just Lola and me moving as one in complete harmony, defying gravity, and at times breaking the laws of physics.
In less than twenty hours I’d be headed stateside to become a civilian after ten years of service and I wasn’t sure how I felt about that or what came next. For the most part, I avoided feelings of any kind. I’d had them before and knew they lead to pain and agony. In my experience, staying detached was best.
Being a Marine had given me everything I’d sought—a strong sense of self, strength, confidence, and independence. I’d grown. Matured. Licked my childhood wounds, come to terms with the past, and for the most part, moved on.
Sure, a couple of ghosts still haunted me. I recognized them for what they were—stark reminders to never allow anyone to get too close or become too important to me.
But none of it mattered then. For one last day I was a Lieutenant in the Marines. And the Captain, bless him, had given me a sweet cake run of a last mission. Essentially a taxi job delivering a black ops asset, shrouded by a heavy cloak of secrecy and need-to-know, back to base.
Viper.
The word alone held power. It sparked a sensual chill that skated along my spine, heated my blood, and snapped nerve ending to tingling awareness. I didn’t know his real name or anything about his life, only the code name and the way he made my body tremble, burn and detonate.
Viper was the ultimate strong, silent type. I’d known him for a year and we’d rarely spoken a word that wasn’t involved with sex. The perfect man for my needs—all sexual gratification and no messy strings or emotions.
Yes, please.
On the rare occasion I got Viper in my helo, I put Lola through her paces in an attempt to shake Mr. Tall, Dark and Deadly’s legendary calm and control. Sadly, I’d never succeeded. The man had nerves of steel. I haven’t elicited a single sound from him, much to my chagrin. And this final flight as a Marine was my last chance.
Time to pull out the big guns.
Threading the needle along a narrow riverbed lined with thick tree growth, I zoomed straight toward a sheer rock-faced waterfall. Waiting until the last possible second, with terrain warnings blaring, I pulled up hard and made a nearly vertical climb up the falls, skids cutting through the water, a huge anticipatory grin stretching my lips. The maneuver never failed to win at least a gasp, if not a few curses, out of my passengers.
Not a peep rose from behind me.
Damn that man!
Color me impressed. And considering the number of testosterone overloaded badasses I’d dealt with during my military career it took a lot to impress me. Even more for me to notice a man’s looks, and I have to admit, Viper is smokin’ hot. Super tall, probably six-three or four, with thick brown hair, and steel gray eyes. His black T-shirt molded beautifully to a ripped torso, and fuck if those cargo pants weren’t lovingly cupping one hell of a fabulous ass.
Yes, I admit it. I’m a total ass girl. There’s nothing better than sinking my fingers into a spectacular pair of glutes while being pounded hard. Yet his unflappable, cool demeanor was what really did it for me, hence the reason I had to snap that control and make him break. Then I’d be able to leave without so much as a backward glance.
My one unbreakable rule, the line I’d vowed to never cross, was fucking anyone from my current duty station. Time and again I bore witness to that situation going bad and I absolutely despised drama. Especially relationship drama. The last thing I needed were thoughts of a man I’d fucked interfering with my focus during a mission.
Since Viper wasn’t assigned to my base or part of my medivac missions and remained drama free, he was perfect for scratching that insatiable itch. With him, I got the bliss of his big cock fucking me ten ways to Sunday and absolutely no entanglements. I doubted he even knew I’d be leaving in the morning.
A sharp pang of regret momentarily fisted my heart. If we were together in a different situation, I could fall skids over rotor for him. 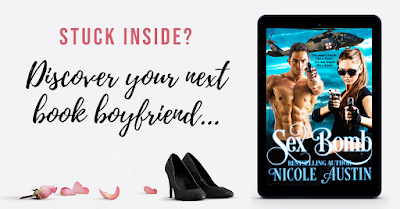 Posted by Nicole Austin at 6:00 PM No comments: