This is a re-post from Regina Kammer's blog

For an explanation of what I’m doing here, please see Part One of this blog series. More authors and their reverted titles are listed below. This time around I received help from a reader who had an extensive library of books purchased from the Ellora’s Cave website — a library that vanished during EC’s website “upgrade” (many readers had this happen). This reader, Cayenne, started keeping track of reversions and re-releases for herself, and shared the list with me. Readers are awesome. Authors would be nothing without them, and publishers should do more to recognize readers’ importance.
Now for the list. Let’s do something positive to support your favorite author and their ex-EC titles! Buy their books! Review their books! Spread the word about their books on social media!

Touched by a Gladiator

Icon Men (series): The entire series of three books – The First Real Thing, Appearing Nightly, A Fool for You – is now available as a boxed set.

Tales of the Shareem (series)

Something in the Coffee 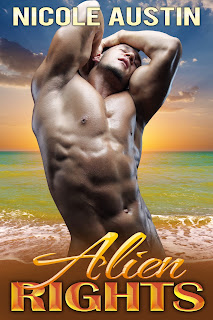 Blurb:
Be careful what you wish for—it just might come true. While Emily may have wished to be taken away, waking up on an alien cruiser, naked and intensely turned-on wasn’t what she’d had in mind.
*This title has previously been published*

Bells tinkled a merry greeting as the door of the Moonlight Diner swung open. Emily Baxter finished refilling the last salt shaker and glanced at the clock. Ten minutes until closing time and a new customer shows up. Great, she’d have to work late again.

Story of my freakin’ life.

With his brown hair sticking up in all different directions, white shirt buttoned haphazardly and one pant leg partially tucked into a sock, the man who’d walked in had a wild gleam in his glassy eyes. He had the lean, athletic body of a runner and when cleaned up was probably rather attractive.

“Aliens!” He pointed toward the back of the diner. “I was abducted!”

Okay, cleaned up and dried out, she amended.

Hank’s bald head appeared in the pass-through. “Aliens? Hey, did you get probed?”

“How’d you know?” The customer stumbled as he made his way toward the counter and dropped down onto a stool with a sharp hiss. “Did Calgon get you too?”

She glanced back at Hank, owner of the diner and her boss. One corner of his mouth drew upward into an evil grin Emily knew well. She’d been a victim of Hank’s bullying and her heart went out to the customer who thought he’d found a sympathetic listener.

“Calgon the alien took you away, huh?” Hank sputtered, barely getting the words out. “You’ve been watching too much TV, dude. Hey, Em. Better call the guys with the white coats. He needs a padded cell and one of those jackets with the really long sleeves.”

While Hank laughed and cracked jokes at the man’s expense, Emily set a cup of coffee in front of the customer and patted his arm. “Ignore Hank. Everyone else does.”

The second she went through the swinging door into the kitchen, Hank grabbed her arm and dragged her over to the grill, where he kept a close eye on the man who sat hunched over the steaming mug.

“That guy’s a total crackpot, Em. Don’t get close to him. Might rub off on you.”

“Insanity isn’t catching.” Jerking free of his hold, she punched Hank’s beefy tattooed arm. “But stupidity is,” she mumbled under her breath.

She understood Hank’s bully mentality—how making other people feel small gave him the false sense of being a big man. Still, understanding didn’t make dealing with him any easier. “You are such an ass! That man is obviously down on his luck and could use a little compassion.”

“Compassion?” Hank gave her a slack-jawed stare. “You’re crazier than he is.”
Emily sighed and shook her head. She preferred to believe everyone had some goodness in them, but Hank had proven himself rotten to the core, lacking any depth or virtue. A true lost cause.

The grill had been shut down and cleaned for the night but there was still a pot of soup simmering. She filled a bowl, put a couple of rolls on a plate and headed for the door, not surprised when Hank moved to block her path.

“That bum didn’t order anything and sure as hell won’t have the money to pay.”

“I’m not sending him back out on the street without a meal.” She couldn’t afford to lose her job but would make a stand on the issue if necessary.

“Okay, Sister Teresa, but you’re not giving my profits away.”

Emily shook her head. “You mean Mother Teresa, moron, and I’ll pay for the meal.”

Hank’s brow furrowed with confusion and disbelief shone in his dark eyes. “Must be paying you too much if you’ve got money to throw away on bums.”

Grinding her back teeth, Emily battled the urge to throw the soup in Hank’s cruel face. “The way you treat people is going to come back and bite you in the ass, Hank. It’s called karma. Because I’m kind and help others in need, one day when I’m down low, someone will offer me a hand.”

Hank’s riotous laughter had her hoping she’d be around to witness the day karma tore him a new one. Why did she continue to try to get through that thick skull of his? He would never see acts of kindness as anything other than signs of weakness. And having shown that weakness would make her a prime target for Hank’s brutality in the days to come.

“Grow up, Hank. You’re not in grade school anymore.”

Emily not only fed the man, she listened to his tale about the aliens and their high-tech spacecraft. She mentally went over her mounting bills and declining budget as he detailed the aliens probing his rectum. She gave him bus fare to get home before showing him out and locking up the diner.

Her own commute was brief—out the back way and up a rickety flight of stairs to her rented room above the diner.

Stepping into the alley, Emily gazed up at the stars. As a child she’d dreamed of blasting away on the space shuttle to visit distant mysterious places. Her customer had insisted there were other forms of life out there, and as crazy as it may seem, she agreed. Considering all the planets in existence, so many more than humans were aware of, surely some of them were inhabited. To believe Earth harbored the only intelligent life would be rather arrogant and naïve.

The whole idea of being abducted and taken away in a spaceship actually sounded pretty damn good to Emily. No more working her fingers to the bone or fending off idiots like Hank. She’d travel to exotic locations and settle down when she found a culture where women were not only cherished but treated with respect as equals.

While the night sky was full of beautiful stars, one in particular captured Emily’s attention. It shined a bit brighter than the others, twinkled faster and appeared closer.

With the customer’s story still fresh in her mind, Emily held out her arms, reached toward the beacon of light and yelled, “Calgon, take me away!”

Between one heartbeat and the next, darkness shut out the stars, her body became weightless and rose into the air, and she drifted off into nothingness. 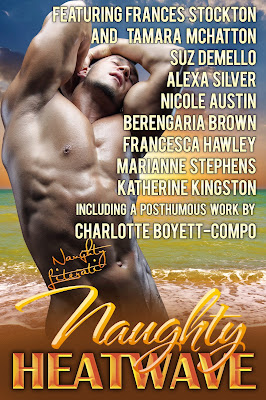 Naughty Heatwave
Turn Up The Heat

Featuring:
Paradise Found ~ Frances Stockton
When Cara Summers and Ian Hamilton are selected for a contest to live off the grid on a private island both have their reasons for needing the grand prize. Neither expects an instant attraction. As the temperature rises between them will they find love or end in heartbreak when reality returns?

Featuring:
Sex Wax ~ Tamara McHatton
Enchanted by a sun-kissed Adonis that sweeps her off her feet, both figuratively and literally, Brooklyn is willing to play on the ever changing tides of her life.

Alice’s Sheikh ~ Suz DeMello
A virginal English noblewoman finds herself under the complete control of an autocratic sheikh–an unexpectedly sexy one who will do whatever he must to have her.

Kismet ~ Alexa Silver
Jon and Alan get together once a year. When Jon’s wife interrupts their reunion, passion explodes. Ghosts from the past threaten to upset the delicate balance.

Alien Rights ~ Nicole Austin
Be careful what you wish for—it just might come true. While Emily may have wished to be taken away, waking up on an alien cruiser, naked and intensely turned-on wasn’t what she’d had in mind.
*This title has been previously published*

The Agreement ~ Francesca Hawley
Can the arranged marriage between Lord Thanos and Lady Zayna move in a new direction or will they remain perpetually at war?

One Kinky Weekend ~ Berengaria Brown
Logan and Zara’s sex life is dead boring, so they ask another couple to join them for a very dirty weekend of naughty sex.

Hot Buns ~ Marianne Stephens
Angela offers to pay Vinnie to use his bakery ovens until hers are delivered. For financial reasons, he agrees. Being near her threatens his determination never to forgive her betrayal. When the truth surfaces, both must share the blame. Can smoldering love between them flame into passion once again?

Weapon of Choice ~ Katherine Kingston
Selvya’s gift for controlling fire made her a weapon in the hands of unscrupulous men. The king’s commander offers a chance for revenge and redemption, but it’s a risk she’s not sure she can take.

The MageWynd’s Cauldron ~ Charlotte Boyett-Compo
Confined to quarters in a windowless room without air conditioning, Fin O’Kelly thinks he’s dropped into hell. When the lovely electrical tech comes to his door to fix the problem, Finn finds out what heat really is!

Enter To Win A Kindle Fire Loaded With Books 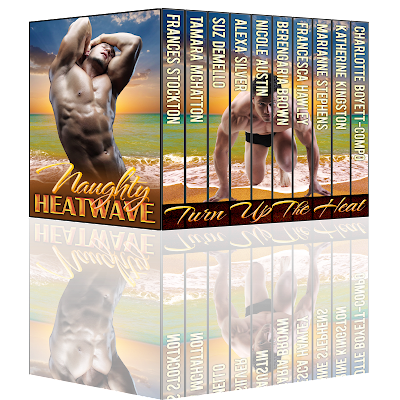