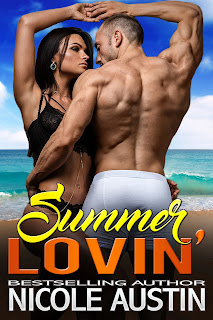 With the big four-oh looming, Larissa Cross is more than ready to shed the roles that have defined her and make drastic changes. Gone are the widowed Army wife, soccer mom and empty nester. She’s even setting aside the school teacher until fall.

A naughty challenge has come at the perfect time and ignited Rissa’s competitive drive. It’s going to be a glorious summer full of hot younger man lovin’ for a new cougar on the prowl. Rawr!

Tattooed and pierced fireman JD Harmon is tempting prey but there’s much more to the hunk than his bad boy good looks. A one night stand isn’t in his plans and sex—no matter how mind-blowing—won’t distract him from his goals. JD intends to tame the wicked cougar and stake a claim on her heart.
*This previously published title has been revised and reedited*

Larissa Cross cruised along the coast with the top down, a warm breeze rushing through her hair. She turned on satellite radio and cranked up the volume as Steven Tyler’s signature scream blasted from the speakers. There wasn’t a cloud in the bright blue sky and the weather forecasters had rated the day as a ten on the suntan scale.

A picture-postcard-perfect Florida day and a great way to kick off her new life. Well, her new summertime life anyway. In the fall it would be back to “Mrs. Cross” and the comfortable routine of teaching elementary school.

But this summer she was going to have fun! Her son had left for college so Rissa was living alone for the first time. She’d sold the house, bought and decorated a new condo, packed up her “teacher clothes” and shopped for a new wardrobe, traded the minivan for a cherry red convertible and got tattooed. Yup, she now sported a colorful butterfly on her right hip—just above the bikini line—to symbolize her metamorphosis from Army widow soccer mom to cougar on the prowl. Rawr!

When you put all the changes she’d made over the past year together it added up to a rather frightening conclusion—midlife crisis. Scary stuff!

Dios, where the hell did all those years go?

Next month she would hit the big four-oh. Pretty sad she’d waited this long to finally rediscover herself. Better late than never though!

A truck full of young guys honked and whistled at her as they sped by. Hmm…maybe the challenge wouldn’t be too difficult. These boys looked way too young but their appreciation still made her smile and gave her confidence a boost.

With a wave to the boys, she turned into the jam-packed parking lot for the public beach. As she claimed one of few available spaces at the back of the lot, her car sputtered, coughed and gave a loud hiss before the engine stalled.

Rissa knew next to nothing about cars, yet even she realized the smoke billowing out from under the hood meant bad news. She jumped out and raced to the front, intending to pop the hood. That’s when she noticed the flames.

Thankfully the pickup had pulled in behind her. The teenage boys who piled out to help were on the ball, whipping out cell phones and calling for reinforcements while warning others in the immediate area to stay back.

In the few agonizingly long minutes it took for the cavalry to arrive, Rissa convinced the boys to salvage the contents of her trunk. Once they had her lawn chair, overstuffed beach bag, umbrella, towels, cooler and her precious e-book reader on the side of the road it looked like someone was having a yard sale. Or more apropos—a fire sale.

“Mrs. Cross?” one of the boys tentatively inquired.

Oh no. He must be one of her former students. Didn’t that just make her day.

“Yes.” She slid the dark sunglasses down her nose and peered over the tortoiseshell frames at him.

“Remember me? Tyler James. I was in your class?”

Prior students always failed to realize how much they’d changed or how many kids she’d taught and expected her to remember them. She played along to make him feel better. “Oh my gosh. You sure have grown up, Tyler. How’s high school treating you?”

Once the others learned she was an elementary school teacher they became a band of protective alpha-males-in-training and stayed by her side, assisting her through the crisis.

In a flurry of flashing lights and blaring sirens, a fire truck, ambulance and police cruiser arrived. The firemen quickly set to work and extinguished the flames while the medics checked for anyone with injuries and the police wrote reports. By the time the firemen were done, her crispy car appeared ready for the junkyard.

Should she call a tow truck? How the hell would she get back home? Anyone she could ask for a ride lived over the bridge, at least a half hour away. She was in no mood to sit and wait that long.

There would be so much to work out now. Thank goodness she had insurance. She’d have to get in touch with the agent to file a claim. Damn, she really loved that car. Her first non-family car in two decades. Now she’d have to shop for another and get a rental in the meantime.

Rissa plopped down on top of the cooler with a heavy sigh as her wonderful plans for the summer disintegrated. In need of some emotional support, she longed to call Cami.

What would she do in this situation?

A wicked grin tugged at her lips. Cami would tell her to check out the emergency workers and if possible get pictures. She’d also tell Rissa to flirt her ass off and get one of those hot young studs to take her home.

She looked up as one of the firemen headed in her direction while scribbling information on a battered clipboard.

Oh yes, I do. Please and thank you!

Damn, the man was gorgeous. Tall, at least six-one, with a shaved head. A bit of dark stubble covered his scalp, ran along his square jawline and above his mouth. A plump, sexy mouth. He had to be in his mid-twenties by her estimation. Not too young or old. Perfect age to pop her cougar cherry.

Yes, what is your name, hot stuff? Please tell me.

Broad shoulders blocked out the sun as he moved to stand before her. What she wouldn’t give to have him strip off the fire gear and let her ogle his body. From his solid build she guessed he had lots of yummy muscles. Maybe even a six-pack. She pictured running her fingers over his tanned skin, feeling the sinew ripple beneath her fingertips.

What a wonderful, helpful boy. Go away now, you brat.

The fire god nodded toward the police officer ready to ticket the boys’ pickup. “If that’s your truck, you might want to move it.”

“Aw crap,” one of the boys groaned. The group loped off, leaving Rissa alone with the hunk, whose sharply focused attention suddenly made her nervous and fidgety.

He might have been preoccupied earlier but now she had his undivided attention. Coal black eyes took a slow journey from the top of her head down her see-through cover-up, pausing at breasts nearly spilling out of tiny bright blue triangles before dipping down to linger on her tattoo then stroke along her legs. And boy did his gaze ever have the impact of a physical caress. Everywhere his eyes touched her skin tightened and long-ignored nerve endings tingled.

If he can do that with a look, imagine what he’d be able to do with those big, strong hands.
Posted by Nicole Austin at 12:00 AM No comments:

The Naughty Literati are now on Instafreebie! And we're starting off by giving away our Autumn 2015 anthology Naughty Reunions: Return to Romance -- for free!

Just go to our Naughty Reunions page on Instafreebie and sign up to subscribe to our newsletter, Naughty News. Instafreebie will send you your choice of an epub or mobi file.

Subscribing to Naughty News keeps you up to date with new releases, giveaways, author spotlights, exclusive excerpts, and contests! And now you'll get a free copy of Naughty Reunions: Return to Romance! 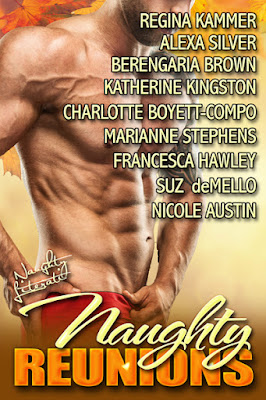 Posted by Nicole Austin at 5:09 PM No comments: